Nabe (鍋, pronounced ) is the Japanese word for a pot or pan. But it also means a one-pot dish where several ingredients are cooked together in a broth. While nabe can be cooked regularly on the stovetop, the most popular kind of nabe is cooked at the portable burner table. The quintessential image of a happy Japanese family gathered around the dining table eating a nabe. (Nabe cooked at the table is also called yosenabe (寄せ鍋), which means a nabe where the ingredients are gathered together (寄せる、yoseru). Because a nabe is piping hot, it’s a great winter meal, with very little preparation.

Many Japanese nabe recipes call for ingredients that are only widely available in Japan, but this is a nabe recipe that you can recreate wherever you are. It uses chicken and many vegetables, so it’s very healthy and frugal – perfect recession cooking! The only special equipment you need is a tabletop cooker of some kind that can sustain boiling heat. See more about tabletop cookers in the Notes at the bottom. 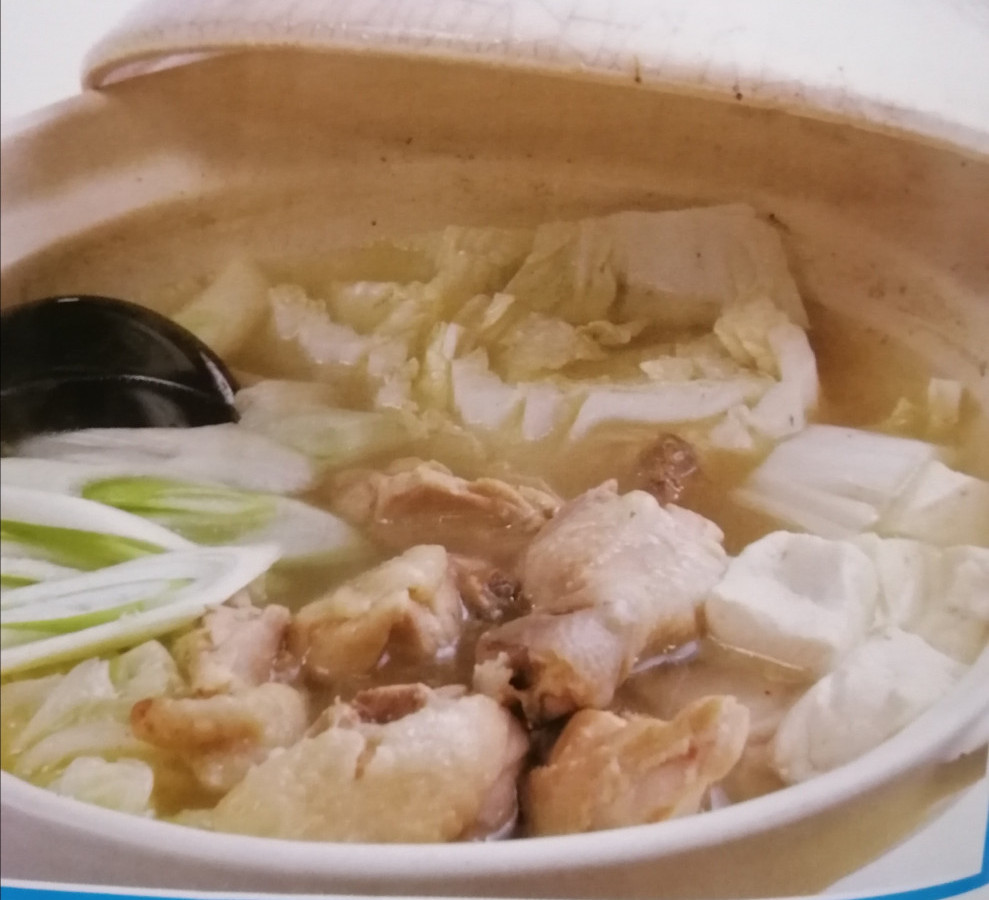 Put the piece of konbu seaweed in the pot and fill it up halfway with water. (Ideally, you want to soak the konbu for a while, so if you can plan, put the water and konbu in the pot in the morning or something.) Bring up to a boil. If you can’t get hold of konbu, dashi granules like Hondashi are ok. Or you could even use regular stock cubes or stock powder, though, of course, it won’t taste as nice. You could even use canned chicken or vegetable stock. Here I’ve used a generous piece of konbu. You can take the konbu out or leave it in as you cook the hotpot.

Make your ingredients ready in the meantime. Here you see the cut-up Chinese cabbage, spinach, and enoki mushrooms. (The traditional nabe green vegetable is shungiku (edible chrysanthemum leaves), but that’s not that easy to get outside of Japan, or if you can get it can be expensive – though look for them at your Asian grocery store. Any green will do, though – here, I’ve used plain old spinach, but pak choi /bok choy is good, as is Chinese broccoli, Swiss chard, and so on. Use what’s available to you. And they can switch mushrooms around too – if you can’t get enoki or shiitake, use something else, though white button mushrooms are not that nice in this. Portobellos, chestnut mushrooms, shimeji, maitake – all are good. ) 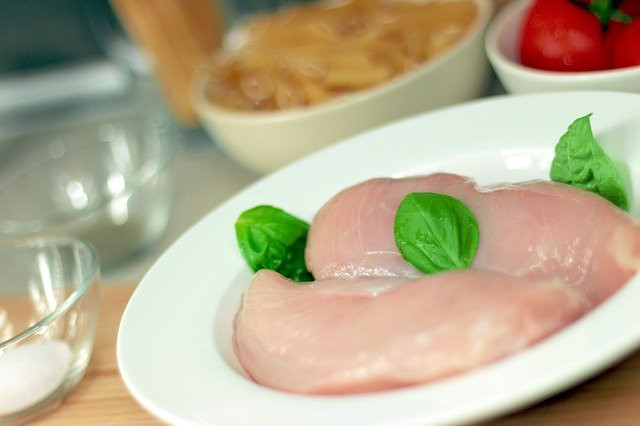 And here’s the chicken. I did leave the skin on, but you can take it off if you prefer. 3 ounces / 100g may not seem like much, but people will be full!

When the pot comes to a boil, lower the heat a bit and start putting the ingredients in. Start by putting in some chicken pieces (reserve some for putting in later, after the first batch of chicken is eaten up), then add the vegetables. You may want to start with the leeks, then the other vegetables – but really, there are no hard and fast rules. All you need to do is to simmer until done.

The tofu and the shiitake benefit from being in the pot longer, so they can soak up the broth’s flavors, which will get more and more flavorsome as the meal progresses. Note: skimming off any scum that rises to the surface will make the broth taste better, but again it’s not a critical point.

When things get cooked, take them out into the individual bowls with the chopsticks or tongs and the ladle. (In Japan, they sell nice short wooden ladles for nabe. See if your local Japanese grocery store carries them.) Each person then adds the condiments to their taste.

The traditional ones for tori nabe are ponzu and soy sauce. You can get ponzu at a Japanese grocery store or even at many regular grocery stores in the U.S. these days. If you can’t get it, fresh lemon juice will do. (If you’re in Japan, you can go one step better than ponzu and get a fresh sudachi (すだち, a green-skinned citrus fruit) and squeeze that on. Yuzu juice is nice too.)

Here’s a helping of the hot pot—lots of vegetables, a little chicken, tofu, and some of that broth. 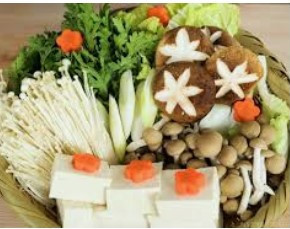 As the pot gets depleted, keep adding things until you run out or until everyone is almost full. Don’t throw out the leftover broth, though – that’s the tastiest part of the meal! Usually, you would cook some udon noodles in that flavor-packed broth and serve to end the meal. I didn’t have any udon noodles on hand, so I just put in some rice. You could put other things into that last broth: dumplings, shirataki noodles (for the low-carb or dieting crowd), etc. – anything that can slurp up that flavor.

Nabe is great for parties, but they are straightforward on the cook, too, since all you have to do to cut things up and take out the burner and the pot.

Tabletop burners are not that expensive and can be great fun. This type of one-ring gas burner is perfect. I use an electric burner since gas cooking is almost unheard-of here. It’s similar to this one. The burner has to be able to sustain boiling heat in the pot.

Do be careful of little kids around a hot pot and burner on the table! Remember to use a heavy pot that can’t easily tip over, and don’t let little hands poke around in the pot unless experienced. 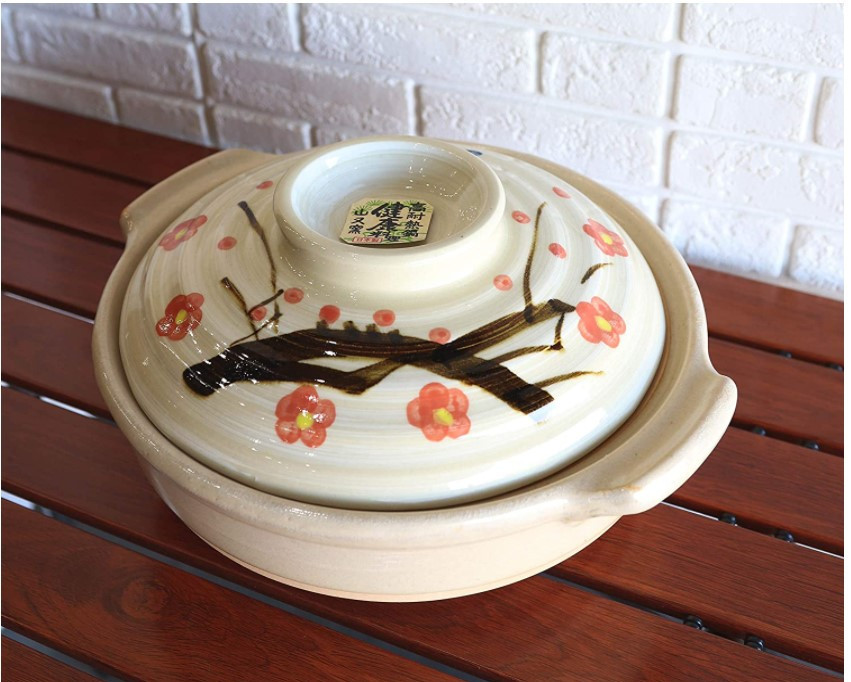