Okinawa is the largest of the Ryukyu Islands located off Japan’s coast between East China and the Philippines.

Okinawa belongs to one of five regions of the world known as blue zones. People who reside in blue zones live exceptionally long, healthy lives than the rest of the world’s population.

The lifespans enjoyed by Okinawans may be explained by several genetic, environmental, and lifestyle factors. That said, experts believe that one of the strongest influences is diet.

This article explores the Okinawa diet, including its primary foods, health benefits, and possible drawbacks.

What is the Okinawa diet?

In the purest sense, the Okinawa diet refers to the people living on the Japanese island of Okinawa. Their unique diet and lifestyle are credited with giving them some of the longest lifespans on the planet.

The traditional Okinawa diet is low in calories and fat while high in carbs. It emphasizes vegetables and soy products alongside occasional — and small — amounts of noodles, rice, pork, and fish.

In recent years, the modernization of food production and dietary habits has led to a shift in the macrOkinawa diet’s macronutrient content though still low-calorie and primarily carb-based. It now contains more protein fat. 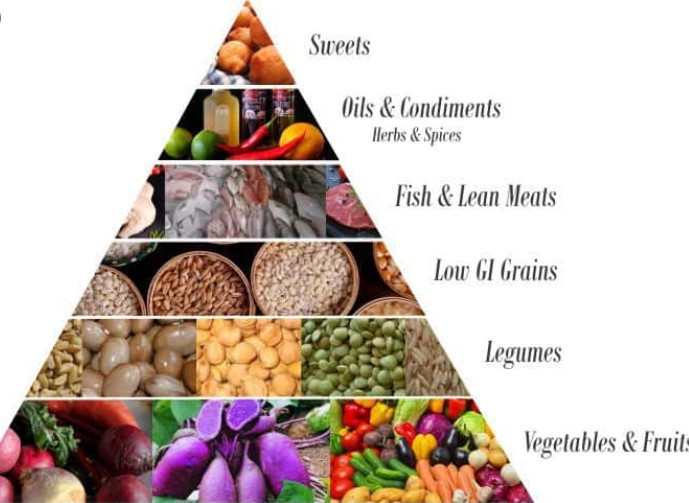 Additionally, Okinawan culture treats food as medicine and utilizes many practices from traditional Chinese medicine. The diet includes herbs and spices known for having health benefits, such as turmeric and mugwort.

The health benefits associated with the traditional Okinawan diet have given rise to a mainstream version intended to promote weight loss. While it encourages the intake of nutrient-dense foods, this offshoot is heavily influenced by the Western diet.

Many of the Okinawa diet’s benefits may be attributed to its rich supply of whole, nutrient-dense, high-antioxidant foods.

Essential nutrients are important for your body’s proper function, while antioxidants protect your body against cellular damage.

Unlike other Japanese, Okinawans consume very little rice. Instead, their main source of calories is the sweet potato, followed by whole grains, legumes, and fiber-rich vegetables.

The staple foods in a traditional Okinawan diet are :

What’s more, jasmine tea is consumed liberally on this diet, and antioxidant-rich spices like turmeric are common.

The traditional Okinawa diet is quite restrictive compared to a modern, Western diet.

Because of Okinawa’s relative isolation and island geography, many foods have not been accessible for much of its history.

Thus, to follow this diet, you’ll want to restrict the following groups of foods :

Because the modern, mainstream version of the Okinawa diet is based primarily on calorie content, it allows for more flexibility.

Health benefits of the Okinawa diet

The most notable benefit of the traditional Okinawa diet is its apparent impact on lifespan. Okinawa is home to more centenarians — or people who live to be at least 100 years old — than anywhere else in the world.

Proponents of the mainstream version of the diet claim that it also promotes longevity, but no substantial research can validate these claims.

Many factors influence longevity, including genetics and environment — but lifestyle choices also play a significant role.

High levels of free radicals — or reactive particles that cause stress and cellular damage in your body — may accelerate aging.

Research suggests that antioxidant-rich foods may help slow the aging process by protecting your cells from free radical damage and reducing inflammation.

Animal studies suggest that a calorie-restricted diet made up of more carbs and less protein tends to support a longer lifespan than high-protein Western diets.

More research is needed to understand better how the Okinawa diet may contribute to longevity in humans.

Okinawans who do not live long lives experience fewer chronic illnesses, such as heart disease, cancer, and diabetes.

In the traditional diet, most calories come from sweet potatoes. Some experts even claim that sweet potato is one of the healthiest foods you can eat.

Sweet potatoes provide a healthy dose of fiber and have a low glycemic index (GI), meaning that they don’t contribute to sharp raise blood sugar; rises also offers essential nutrients like calcium and potassium magnesium, and vitamins A and C.

Carotenoids have antioxidant and anti-inflammatory benefits and may help prevent heart disease and type 2 diabetes.

Research suggests that particular soy-based foods are associated with a reduced risk of chronic illnesses like heart disease and certain types of cancer, including breast cancer.

Many of the foods that make up the traditional Okinawa diet may support a longer lifespan and a reduced risk of chronic illnesses.

Although the Okinawa diet has many benefits, possible drawbacks exist as well.

The traditional Okinawa diet excludes different groups of foods — many of which are quite healthy.

This can make strict adherence to the diet difficult and may limit valuable sources of important nutrients. Moreover, some Okinawan foods may not be accessible depending on your location.

For instance, the diet contains very little fruit, nuts, seeds, and dairy. Collectively, these foods provide an excellent source of fiber, vitamins, minerals, and antioxidants that can boost your health.

Restricting these food groups may not be necessary — and could be detrimental if you’re not careful to replace missing nutrients.

For this reason, some people prefer the mainstream, weight loss version of the Okinawa diet because it’s more flexible with food choices.

It can be high in sodium.

The biggest downside to the Okinawa diet maybe its high sodium content.

Some versions of the diet dole out as much as 3,200 mg of sodium per day. This sodium intake level is not appropriate for some people — particularly those who have high blood pressure.

Notably, the Okinawa diet tends to be high in potassium, which may offset some of the potential negative effects of high sodium intake. Adequate potassium intake helps your kidneys remove excess fluid, resulting in reduced blood pressure.

If you’re interested in trying the Okinawa diet but need to limit your sodium intake, try to avoid the foods highest in sodium — such as miso or dashi.

The Okinawa diet has several downsides, including high sodium intake and unnecessary restriction of specific food groups. However, they can modify the diet to lower salt content and incorporate a wider array of foods.

Is the Okinawa diet right for you?

Although the Okinawa diet has many positive health effects, some people may prefer a less restrictive or less carb-heavy diet.

Several aspects of the diet may benefit your health, such as its emphasis on vegetables, fiber, and antioxidant-rich foods coupled with its restrictions on sugar, refined grains, and excess fat.

That said, we can likewise apply these principles to many other diets and lifestyles.

If you’re unsure whether the Okinawa diet fits your dietary goals, consider talking to your dietitian or healthcare provider to create a plan tailored to your needs.

The Okinawa diet emphasizes many different healthy dietary and lifestyle principles, including high vegetable intake. However, it may be too restrictive or carb-heavy for some individuals.

The Okinawa diet is based on the foods and lifestyle of Okinawa islanders in Japan.

Although its benefits may include a longer lifespan, it can be restrictive and high in sodium.

Still, a modern form of the diet lifts some of these restrictions and is geared toward weight loss. Keep in mind that this modern version has not undergone rigorous scientific study.

If you’re interested in improving your overall health and boosting your longevity, the Okinawa diet could be worth trying out.